One agenda item for the February 10, 2015 Oakland Township Board meeting will be a request to pay an engineering firm $9,675 for a storm water management plan that is legally required from Oakland Township.  The need for this expenditure has its ‘roots’ in an unauthorized unilateral decision that Supervisor Gonser made in May of 2013, when he authorized one of our Township Attorneys, Charlie Dunn, to request a “termination of certificate of coverage for a general storm water management permit”.

This request is currently under litigation between the Township and the governing environmental bodies, and has never been disclosed to the public.  The Township is still required to provide the storm water management plan while the issue is being resolved in the courts, hence the need for the plan.

There are many issues associated with this matter:

Here is a copy of the summary page that is part of the February 10 Board packet: (click on image to enlarge) 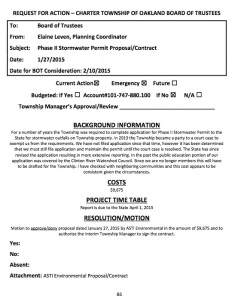 Here is a video of the October 22, 2013 Board meeting, at which Trustee Keyes pointed out the unauthorized decision.  It was at this same meeting that she announced her resignation from the Board.

Here is a copy of the May 3, 2013 letter sent by Charles Dunn to the MDEQ without the approval of the Oakland Township Board.

Why is this important to the citizens of Oakland Township?  Supervisor Gonser’s unilateral unauthorized decision in May of 2013 has resulted in legal issues between Oakland Township and the environmental governing bodies.  The decision by the Board to not participate in the Clinton River Watershed Council has resulted in an additional $8,000 expense that was totally unnecessary.

The bottom line is that our Supervisor and Board have made decisions that are costing the taxpayers money (Engineering and Legal fees) that could be spent on other things needed in our Township.

Oakland Township has historically been on the leading edge of best practices in protecting our beautiful Township.  Other communities looked to us as an example of what to do.  Under our current Board, we are now fighting the DEQ, MDEQ and the Clinton River Watershed Council.

If the decision to terminate our participation in the storm water permit program was made based on a recommendation from our Township Attorney (who would certainly benefit from any future litigation as a result of that action), one must question the appropriateness and ethics of such a self serving recommendation.

On the other hand, if the decision was made by Supervisor Gonser, based on what he wanted to do, without any Board or public input, one must question his motives.  However, his decision should come as no surprise to the residents, given his expressed opinion on environmental issues as previously reported on this website.

A new kind of "Transparency" Board of Trustees Board split? Ethics Legal Problems Planning and Zoning Supervisor Gonser Uncategorized
%d bloggers like this: