At the June 27, 2016 “Meet-and-Greet” candidate event that Trustee candidate Lana Mangiapane set up, it was discovered that ALL of the Parks and Recreation Commission and Board candidates that were sponsoring this event are recommending a ‘NO’ vote on the Parks renewal millage.  They are running for office as a ‘ticket’   One of their documents states:

“This action will NOT close the Parks, it would simply turn the funding of the parks to the Trustees.”

The candidates who are running as a ‘ticket’ include:

(*) Were not present at event

This illegal document is the same one that was previously reported as being distributed on residents mailboxes along with some candidate campaign literature.  See “Fact sheet on Parks and Recreation Commission and millage renewal”.

A second document they were handing out indicates that they all recommend voting ‘NO’ on the parks renewal millage. 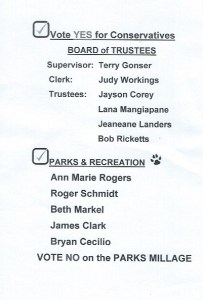 Why is this important to the citizens of Oakland Township?  There has never been such a clear distinction between the candidates who are running for the Parks and Recreation Commission. The four Parks candidates named above must think that the money for managing the Parks will ‘magically’ come from the Trustees.  Where is that money coming from?

As I stated, the choice is clear!  If you like the Parks in Oakland Township, please vote ‘yes’ on the millage renewal, and the true ‘Park Protectors‘ shown here:

The choice is also clear regarding the candidates for the Board.  Knowing the millage renewal position of the Board candidates mentioned above is one factor the voters should consider.  It is also interesting that none (Jeaneane Landers being the exception) of the Board candidates running on this ‘ticket’ have provided their position on the form of governance they recommend for Oakland Township.  Jeaneane Landers has stated that she supports changing our structure to what Supervisor Gonser has been trying to do for almost 4 years  – Gonser being a full time Supervisor, and elimination of the the full time professional municipal Manager position.

Absentee Ballots are going out this week.  It will be an interesting summer!

The editors of this website have reached out to all of the candidates that are running for Oakland Township Board positions this summer.  We have asked for their opinion on an important issue facing our Township.  The issue pertains to the form of governance Oakland Township will possess in the future.  Will it be the “Board/Manager” form of governance that we currently have, or will it be the full time “Strong Supervisor” form that current Supervisor Gonser has been proposing since being elected in 2012?

Responses from 11 of the 15 candidates can be seen by going to the top of this page and clicking on the “2016 CANDIDATE OPINIONS” tab.  A drop down menu will appear where you can click on, and read, each of the candidate’s positions on this matter.  (For hand held devices, click on the ‘MENU’ tab, then the “2016 CANDIDATE OPINIONS” tab will appear.)

You can also view each of their opinions by clicking on their names here:

We have not received opinions from four candidates after repeated attempts (two emails and one phone conversation with each of the candidates who had not provided their opinion). This post is being published on the day each of them was informed the information would be posted.  (Andy Zale’s response came in two weeks after the deadline.)

We have not received responses from:

Please consider the positions of the candidates on this issue when you vote on August 2, 2016.  Also, please share this information with friends and relatives in our community.  So far, this is the only forum where candidate opinions on issues have been shared.

NOTE: If you have another issue that you would like to obtain each candidate’s opinion on, please make that request by adding a comment at the bottom of this page. We will try to get responses from the candidates on the issue you raised.